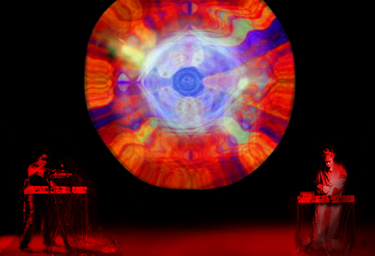 Martin Rev is a musician who, together with Alan Vega, formed the legendary New York based punk rock duo Suicide.
Stefan Roloff is a filmmaker and artist known for his pioneering digital works. Crossing boundaries between visual art and music, his groundbreaking video “The Face” was a prototype for Peter Gabriel’s “Sledgehammer”. It also started the Rev / Roloff collaboration in 1985, with Suicide’s “Dominic Christ” song. Rev / Roloff are now, for the first time, presented as a live performance. On stage, a circular screen is suspended in mid air.
Martin Rev plays in front of it while Stefan Roloff mixes projections from a variety of his video creations. Because of their improvised parts, no two shows are alike. Images and music are combined into one direct and raw new language that ignores the individual disciplines’ safe margins and doesn’t need any translation. Like a hypnotic ritual, it pulls the audiences into a space beyond common boundaries and all that first meets the eye.